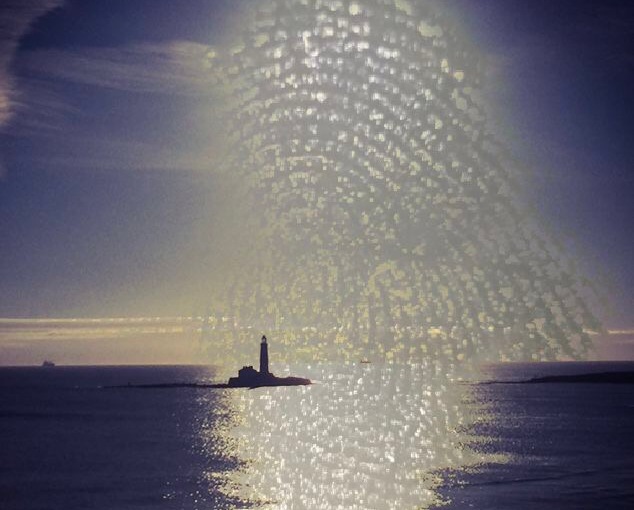 Due to my confusion over my project I reached out to my social media community to see if they could provide me with some clarity in someways it made it a little worse. 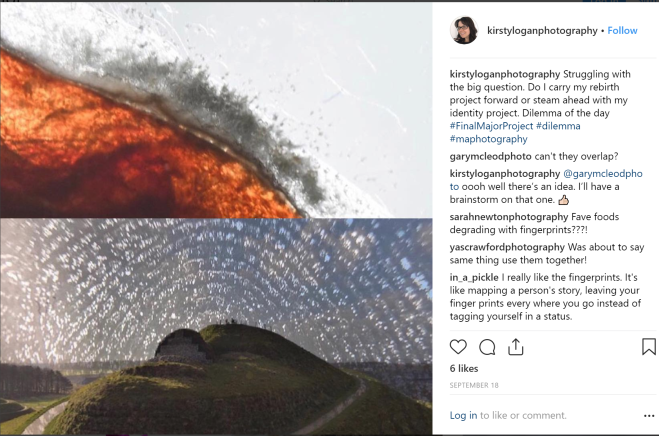 The consensus was to combine the two projects together. To combine favourite foods and watch them degrade with the fingerprint.

I took this input and did some brainstorming but I couldn’t seem to get them to connect. Perhaps it links through to memory in that, when we used to have family trips to the beach we used to take seaside sandwiches. Which by the time we ate our picnic would inevitably have some sand in them – so maybe this isn’t really about identity perhaps its actually about memory more. So I could gather together a memory – bring in the items that trigger the memory and overlay those images together.

Taking an copy of a old family image, sprinkle sand fragments from the beach over and include a degrading piece of sandwich.

This then creates almost a memory box for each photograph.

I feel quite torn in my work today. Having just got my results and my old project to a certain degree was successful. However I just don’t feel any love or joy and quite simply I don’t know who my audience is and this is reflected in some of the feedback I have received also.

The new work I have been completing I have a real passion for. I would also have the perfect location for an exhibition. My feeling that the Newcastle City Library would be great for this if I can get it booked.

The ideas that I have swirling in my brain are unnerving as fear of failure is high. I desperately want to achieve a good grade for this course and I just need to find the perfect project. I also want to be able to connect on a personal level with this project.

I am still really drawn to the idea of Identity – I feel I need to discuss this when we are back, perhaps in my Pecha Kucha presentation tutorial.

The Fingerprint truly identifies an individual therefore to overlay a fingerprint over a location does this, exemplifying the feeling of identity and individual feelings of a specific place.

I’ve posted this image to social media and the feedback seems quite positive. I think personally this project means much more to me which may well mean I am more able to engage more with my subject.

To get me to really think about this subject I carried out some creative thinking to see what ideas it may throw up.

“a close similarity or affinity”

“Your identity is who you are”

“Condition or character as to who a person or what a thing is; the qualities, beliefs, etc, that distinguish or identify a person or thing”

“An impression or mark made on a surface by a person’s fingertip, able to be used for identifying individuals from the unique pattern of whorls and lines on the fingertips”

The feature of my focus in my previous module (Surfaces and Strategies) was Life/Death/Rebirth, and whilst I really enjoyed this I am questioning whether it is something that I really want to continue.

Looking back over some past work I found my Sellotape image from the Informing Context module. This image features a fingerprint. This made me think about Identity.

What I noticed about this book was while there were a couple of images from the North East there is much more focus on the North West. Quite often we seem like a forgotten people not featuring a great deal in the government plans for improvement, the refusal to dual the A1 instead finding projects further south.

I don’t want to use portraits I want to use fingerprints over the top of North East images.

This is my image Sellotape which I link closely to identity.

This was my first meeting with Wendy to go over what I have done in the course previously and also where I see my work going or the course of the Final Major Project module.

We discussed the last module which was focused on Rebirth – and how I watched pieces of fruit and then using macro photography to show the changes from one form to another. Transformation.

What I need to do with my work:

I really need to figure out what it is that interests me, what is the direction that I want to take.

Do I really want to set along the same path of macro, and inanimate objects or pieces of fruit.

What do I really want my final piece of work to be about?